Types of Flour for Baking 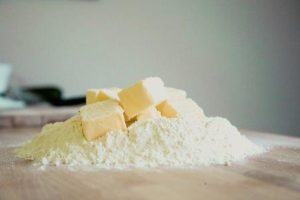 Every baker works hard to produce a good-quality bread that looks good and tastes amazing. The baker’s skill at mixing, kneading and proofing the dough plays an important role in the process, but without the right flour, even a good baker can fall short of his quest. There are many different types of flours available, but using the correct flour for a particular recipe is the key to a successful end product.

Wheat Flour is the major ingredient used in most baking.

It is milled from hard and soft wheat, and must consist of high quantity protein to form an elastic, extensible dough; to withstand mixing, stretching and shaping, and to support the weight from other ingredients.

White flour is produced from the endosperm only, whereas wholemeal flour includes all parts of the kernel. Brown flour is finer than wholemeal as some of the bran and germ are removed. ‘Stone mill ground’ refers to the ancient practice of crushing the wheat kernel between two stones. 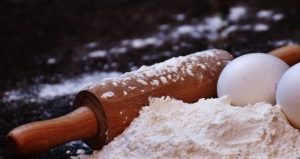 All-purpose flour is the most common type of white flour used in a number of different baked goods including cakes, breads, pastries and biscuits. It is made from hard wheat or a combination of hard and soft wheat. The endosperm is separated from the bran and wheat germ during the milling process and finely ground. All-purpose flour may be bleached or unbleached and enriched. The protein content is between 10 and 12%. Self-raising flour is all-purpose flour to which a leavening agent and salt is added. It is used to produce biscuits and some quick breads, but rarely used with yeast.

Bread flour is produced for the commercial baking industry from hard wheat and has a relatively high gluten content. Gluten gives elasticity and structure to dough. Bread flour is a popular choice for yeast and other artisan breads.

Cake flour is a silky, fine-milled flour produced from the endosperm of soft wheat varieties and bleached for whiteness. With a lower protein (about 8%) and higher starch content than bread flour, cake flour is used in a number of baked goods.

The endosperm of hard durum wheat is coarsely ground to produce semolina. During the grinding process, a fine powder is produced, essentially a by-product of the process, called durum flour. Both durum flour and semolina are used in the manufacture of pasta. Durum flour may also be used in some speciality breads, giving them a signature yellow hue. Semolina is used in breakfast cereals and couscous.

Flour treatment agents, also called bread improvers or dough conditioners, are bleaching agents, emulsifiers, reducing agents, oxidation agents, enzymes and vitamins that are added to flour at the mills, or during the production of the dough at the factory. They are used to produce a desired result that enhances the quality of the product. Benefits include enhanced baking quality as well as volume, crumb texture (softness), crust colour, shelf-life and even flavour or smell.

Gluten free baking presents a real challenge for bakers. It isn’t as simple as swapping an alternative flour for a wheat flour in the same quantities without carefully adapting the recipe. Bakers often blend several different types of gluten-free flour in order to achieve the desired texture and taste. Gluten-free flour mixes can help save time in the bakery and provide a convenient way to supply a sort-after product in today’s market.

What is Gluten? Two proteins called gliadin and glutenin are found in wheat flour. When liquid is added to wheat flour and the dough is mixed and kneaded, the proteins combine to form strands and create a network of proteins – gluten! It reacts with yeast which helps the dough to rise and retain its strength and structure.

There are many different types of flour than can be used to produce a gluten-free flour mix. Let’s take a look at a few of the more common types:

Buckwheat is naturally gluten-free. It has a nutty flavour and can be used to produce dense cakes, pancakes and noodles.

Brown rice flour is quite coarse in texture but is a popular substitute for gluten-free baking.

Oat flour is oats that has been ground down to a powder form. Oat flour may be processed in a factory that also processes grains that contain gluten, resulting in contamination. If you choose to include oat flour in a gluten-free product you must ensure that the oat flour is processed without the threat of contamination.

Quinoa flour has a good texture but can be slightly bitter, a taste produced from the coating on the seeds. Debittered quinoa flour is a better option for baking. Quinoa flour produces a nut-like flavour to baked goods and is suitable for biscuits, rusks, muffins and scones.

Sorghum flour is produced from the African cereal grain, sorghum. It can be used as a substitute for wheat flour, providing a lightly sweet flavour. Sorghum flour can be used to make a variety of baked goods, included cakes, biscuits, muffins, flat breads and others.

Rye (Secale cereale) is a cereal grass that is milled to produce rye flour. While some rye breads are made from 100% rye flour, many are a combination of wheat and rye flour. Rye has a lower amount of gluten but it is not gluten-free.


Please sign up to our newsletter and have the latest news, developments and innovations conveniently delivered to your inbox.